The many incarnations of "Sonic the Hedgehog 4":

The first Sonic 4 I've known about is the one for the SEGA Mega Drive that a guy named "Wubber" bought back in 2006, it was a bootleg originating from either Taiwan or China. I managed to obtain the rom of the bootleg after only seeing blury TV footage of it for the longest time, and it actually plays pretty alright. The following will be a quoting from the original documentation page from 2007: 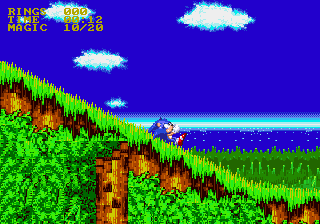 "While at first it seems like a generic platformer with a Sonic skin on-top to make a quick buck, it seems like the developers tried to put in some effort. You can't roll down slopes but you can slide down them, and it presents a rudemientry sprite scaling effect probably pre-rendered or done in software. Unlike a few other Sonic bootlegs I played, it actually preserves the idea that rings act as your health. When you get hit with rings, you lose up to 5 rings. (though they don't scatter, rather they drop right down onto the ground, making it really easy to recollect them.) If you have no rings when you get hit, you die like in the real Sonic games. This bootleg also has a rather strange magic mechanic where you can do special moves at the cost of some units of "magic", you start with 20 magic and use them up by holding the MODE button on the six-button controller and pressing an action button to perform a special move. (On a three-button controller in three-button mode (selected from the game's options screen), you hold START instead, making it impossible to pause in that mode.) If you have 0 magic, you start to lose rings every second and die if you have zero rings."
For more info, click here.